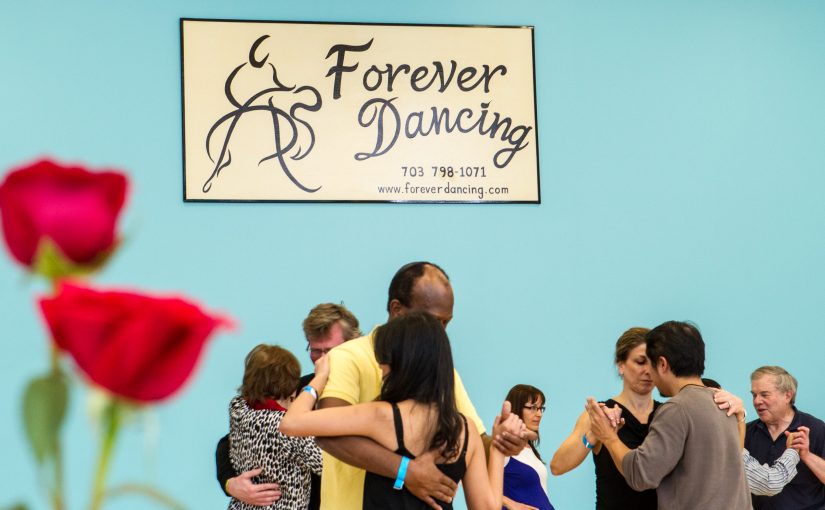 Forever Dancing School of Dancing, is where thousands of people have been learning to dance all social dances (partner dances), plus Aerialism (Silk, Rope, Lyra and Trapeze), Capoeira, Ethiopian Dance, and Zumba. “Forever Dancing” School of Dance offers the following private lessons and group classes:

Do you want to find out more about, the best way to learn to dance? (click here!) , or curious about the benefits of dancing (click here!)

Are you ready to start your private lessons? (click here!)

Do you want to join our group classes? (click here!)

Here is some quick information about the social & competitive dances we teach:

Argentine Tango is a style of Tango originated in the streets and salons of Buenos Aires and is characterized by its passionate hold and complex leg and foot movements.

Bolero is a slow Latin dance which originated as one of two forms of Rumba (Bolero Rumba and Son Rumba), and still shares many of the same figures. Bolero differs from Rumba in its tempo and style of music and movement.

Cha-Cha is an exciting, syncopated Latin dance which originated in the 1950’s as a slowed-down Mambo. The Cha Cha gets its name and character from its distinct repetitive foot rhythm, 1-2-3 step-step which is similar to Swing.

This Swing form is also called American Swing, or Triple Step Swing due to the rhythm of the basic triple step, this dance consists of six and eight count patterns. It is a circular dance that is danced with a bounce and is very grounded and not high in the legs. This bounce requires the dancer to stay very smooth and not jump around much. East Coast Swing, derived from Lindy Hop and Jitterbug, is the base for all swing dances.

Foxtrot is a smooth dance introduced to the public in 1913 by Harry Fox, noted for being the first dance to incorporate into the rhythm a combination of Slows and Quicks. Foxtrot is characterized by smooth, walkingstyle movements, but can be adapted to fit a variety of musical tempi and style, or to fit onto small, crowded nightclub dance floors.

Hustle is often associated with retro disco music, the hustle is the perfect dance for dance-beat, nightclub music including everything from pop to rap and hip hop.

Jive is the European version of the East Coast Swing, this dance uses six and eight count patterns. However, it is danced quite bouncy with very sharp foot kicks and “flicks,” to faster tempo swing music and is meant for competitive style dancing.

Mambo is a fast Latin dance, similar to Salsa, which comes from Cuba. Mambo was brought to America in the 1940’s and 50’s and eventually adapted as an American style ballroom dance. Most of the movements emphasize the second beat in the measure, suggestive of the Clave rhythm which is fundamental to Mambo music.

Merengue is an energetic Latin-style march which originated in the Dominican Republic, which emphasizes a straight-ahead 8-count rhythm taken with Cuban Motion. Merengue is now also a subset of the modern club-style Salsa dances.

Night-Club Two Step is an easy-going social dance, similar in movement to the Bossa Nova, first introduced in the 80’s by Buddy Schwimmer and popular amongst the West Coast Swing crowd. Nightclub 2-Step is normally danced to medium-tempo pop songs and ballads, using combinations of Slow-Quick-Quick and Quick-Quick-Slow rhythms.

Paso Doble is a dramatic French-Spanish Flamenco-style march danced in 2/4 time, with man portraying the matador in a bullfight, the lady as his cape. The character of the dance is arrogant and passionate.

Peabody is a dance developed in the United States around 1920, which was created as a fast version of the Foxtrot characterized by rapid progression and frequent use of Right Outside Position and locking actions.

Quickstep dance began as a quick version of Foxtrot mixed with the Charleston, and musical “Jazz” influences. It is characterized by fast movement, often including a variety of hops, kicks, skips, lock steps and chassés.

Rumba is a Latin dance characterized by Cuban motion done to romantic Latin songs and music, the Rumba is a slow, sensuous, romantic dance which spotlights the lady and features much flirtation.

Salsa is a hot Latin dance similar to Mambo, which, when danced correctly, displays a lot of shaking, shimmying, and hip action.

Samba is the official dance of Brazil. Characterized by “bounce” action, it is danced to fast music in 2/4 time..
Tango The Tango originated in Argentina. A progressive dance that moves along the line of dance, it is characterized by staccato movements of the feet and flexed knees, and stylized poses that highlight its dramatic style

Viennese Waltz is a fast ballroom dance in 3/4 or 6/8 meter, often associated with the music of Johann Strauss.

Waltz The oldest and best known of all the Ballroom dances, Waltz is a progressive dance using rise and fall and danced to 3/4 Time music. Slow Waltz evolved from the fast paced Viennese Waltz. .

West Coast Swing is a slotted swing dance in 4/4 time, characterized by its smooth and linear style.